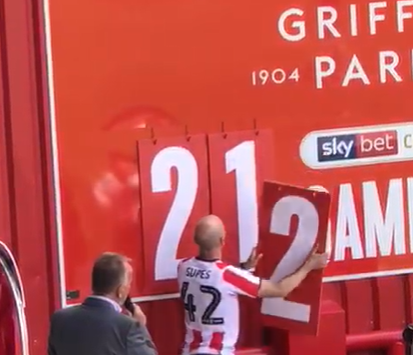 BIAS were delighted to be asked to perform the farewell to Griffin Park countdown at half-time during the Hull City match on 17th August.

BIAS was formed in 1998 in protest against David Webb’s asset stripping of the club, however, it was in 2001, having defeated Ron Noades’ plans to move the club out of Brentford, firstly to Woking and then to Kingston, that the campaign to find a suitable new home for Brentford within the borough ramped up. BIAS launched the political party ABeeC, and Luke Kirton’s election to the Council saw a positive shift in the local political landscape. The BIAS Stadium Action Group (StAG) and Bees United – formed by BIAS – subsequently identified Lionel Road as the favoured location for the new stadium that would help ensure the future survival of the club.

The campaign continued for many years at both local and national level, and BIAS led the campaign which saw thousands of responses sent in to Hounslow Council in support of the planning application for Lionel Road. Planning consent was finally granted in 2013 and confirmed by the Mayor of London and Secretary of State shortly afterwards.

Phil ‘Supes’ Marchant who has been on the BIAS committee for over 15 years and ever present during the campaign for the new ground performed the countdown on behalf of the Association.

Today BIAS remains committed to its core values of being a fully democratic, inclusive and independent supporters group that aims to give a voice to all Brentford fans.

We continue to be run by fans for the fans of Brentford Football Club, and we firmly believe that we are stronger together, the more members we have, the louder voice we have to make a difference.