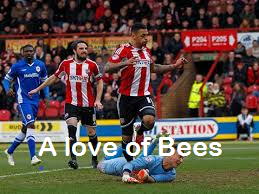 It’s 27/9/2016,  3pm local time at Cancun Airport in Mexico, just about to board the plane home, and as luck would have it, I get a timely text message. My good friend Russell has informed me that we are 2-0 up at half – time v. Reading.

Ah technology it’s a wonderful thing but it wasn’t always like that, trying to get the Bees result in far off places. You may aim a cheap shot at me and say what the hell is a bona-fide Bees fan doing taking holidays during the season.

The cold facts of life are not that simple, when I was younger and working for my sins in a bank, I was bottom of the food chain when it came to holiday choice on the wonderful multi-coloured holiday chart. These days I have to work with my wife’s holiday availability. So Richard head cashier always had the same 2 weeks in his caravan, Stella  would be off to  San Francisco, Dot in the counting house…. Blah blah. Minkkinen, near the bottom of the list 2 weeks in late September. South Of France camping with my drinking pals  was the choice for a few years.

Bearing in mind this was the  early 1970’s we had no mobile phones, no internet, English newspapers  usually 2 days later. A public call box was available but there was always a queue and it was prohibitively expensive. So a common sight would find me hovering around the beach to hear if anyone was  listening to the BBC World service on a transistor radio  , waiting for the football results.

People of  all ages and sizes would be out there, their inbuilt antenna listening out for the monotone reading of the results, drawing closer to the radio like vultures looming, waiting for fresh roadkill. Closer, closer we crept, and then the announcement Football League division Four, (yes you heard correctly) Rotherham United 4 Brentford 3 .

The weekend was ruined , why did I allow such torment . Other radio gatherers had smiles on their faces as wins for Exeter, Portsmouth came through. Why didn’t the signal fail at the given moment, like it did last year. I ask myself this question today, and wonder if an exiled  Bees fan sowed the seeds for the arrival of the internet, it certainly crossed my mind.

I can recall another occasion walking along the promenade in Toulon, spying a newsstand I grabbed the first English newspaper I could locate, sadly it was the Daily Mail or was it called the Mail On Sunday , anyway not my first choice, but needs must. I went in for the kill trying to avoid the watchful eye of  lets call him ‘Pierre the news vendor’. I made haste for the inner back pages, sweat poured from my fore head, I fumbled across the pages, suddenly the paper was snatched from me , and comments in French relating to my parentage rattled through my sensitive eardrums, I legged it…….!!!!

Even taking holidays in the U.K. could be hazardous, ringing my Grandad at 5pm hoping I had enough coins for the payphone. The minute he answered the phone you knew the tone of his voice how we’d done. What was good with phoning Grandad  was that he was a Bees fan , so he’d quit the unnecessary pleasantries and get straight to the point. 1-0 Bobby Ross penalty. That’s all I needed to know, brief, efficient , happy !

Back to Mexico 2016. I’d managed to squeeze in the 2-0 win at Brighton, before leaving, Scratchy had updated me re: the Villa result by text, Russell had given me news on our win 5-0 against Preston. Bees Wall had dealt me a cruel blow by way of wi-fi on my iPad telling me of the Wolves defeat. Fast forward to Cancun Airport , text re: 2-0 half – time v. Reading. Great news, technology keeping me updated, no way Jose !

Ahead of me was an 8.5 hour flight. I would have to wait until we landed at Gatwick before the Newcastle fan across the aisle put me out of my misery with the great news on his iphone of our  4-1 win, as well as updating a Leeds fan. He informed me of our lofty position in the table, which we would surrender the following day with the Geordies beating high flying Norwich in a 4-3 thriller the following day.

Next time you’re watching the Bees think of those souls out there in remote work places around the globe, those who now live overseas, and those on holiday, all seeking news that will hopefully add an extra spark to their day…….they’ll be dancing on the streets of  Aghios Nikolaos tonight !

The BIAS blog is the space to challenge perceived wisdom, entertain readers and inform our members. The views expressed are those of the author and they don’t necessarily represent BIAS policy and (pay attention journalists) shouldn’t be attributed to BIAS.