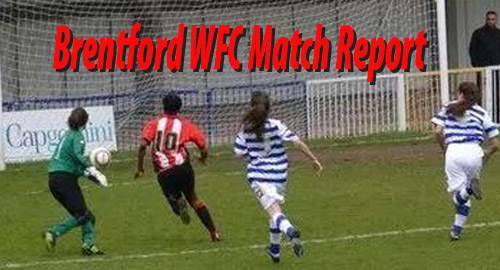 Unlucky for the girls who turned up the volume in the second half.

Brentford welcome Rebecca Collins to the team who has come down from Maidenhead. Tonight’s Captain was Lisa Grant.

The ladies were raring to go, with a good warm up and a quick team talk. Queens Park Rangers started off very well and within the first 20 minutes Brentford Ladies were unfortunately 2-0 down.

The first goal was a free kick given away at the edge of the box on the right hand side. The ball swung in right to the back post for Jessica Painter to get a free head on it to find the back of the net.

The second goal came from a corner where a QPR player hit the target which Rebecca saved but only to be rebounded into the back of the net by Erin Pope.

QPR seemed to be trying to get through on many occasions, Brentford’s midfield were not closing the balls down quick enough. Brentford did have their chances working our way from defence to midfield but not quite reaching the final third of the pitch. QPR seemed to pick up every second ball.

However things changed in the 24th minute when Sophie Troth sent in a ball up top to Sonyia Jones from centre midfield who controlled it nicely to place the ball in the back of the net making it 2-1.

This lifted Brentford up, the Bees were back in the game and after the goal had been scored it seemed like the tempo of the players went up and more chances were becoming available.

However just six minutes later the referee gave a soft free kick outside the box, by the corner flag. Amanda Osborne went to shield the ball out for a goal kick and the referee thought she had body blocked her or moved her out of the way and gave a very soft free kick. This was delivered into the middle of the box to be kicked home by Erin Pope

After a good run up the left hand side of the pitch the game was stopped for a while and both captains called to the ref to tell the spectators to move back from the side line because apparently they were putting people off.

The game settled down for the last fifteen minutes of the first half and Brentford began to hold their our own.

Brentford managed to get the ball down the wings then into the box. Hodo was put through on goal but the keeper came out and Hodo’s trailing foot caught the keepers head. This complete accident brought an up raw from QPR, with a potential booking it was thankfully withdrawn from the referee.

At Half Time came with QPR winning 3-1. Aisha Dior Lutumba came on for Sophie Troth at the break.

QPR were right onto the attack trying to play through Brentford again and did so when Chloe Sampson slotted home the final goal of the game.

The fourth goal went in from a run like this, however lots seemed to think it was offside. Even the Lino, Priscilla (thanks for stepping in), put her flag up. The referee failed to use the lino’s decision, even the QPR players said it was offside!

Brentford played a lot better in the second half, playing some lovely football through QPR’s defence.

Charlotte St. Pierre comes in for Molly Holmes who has come off injured (57 min). Not long after ‘Boardy’ came off for Osborne who tracked back alongside a striker all the way back to the goal line pulling up with cramp.

There was a late challenge on Shayni Marriner in the Brentford half so we went to take the free kick with everyone in the other half ready to grab another goal the ref picks up the ball for a drop ball offering very mixed signals.

Sonyia Jones and Hado Mohamed come off for Sarah Collins and Geraldine Burgess. (67 min). Sarah offered some good combination play with Sophie Lee down the right side of the pitch but we could not get that delivery into the box for someone to get onto the end of.

Geraldine Burgess got through on goal for the goal keeper to just beat her to the ball, however the referee saw that she was pulled back from the defender and awarded a free kick just outside the box. Shayni Marriner stepped up and sent the ball flying near post for the keeper to pat it out for a corner.

When Sarah Colliins got injured Sophie Troth returned for the last five minutes. Brentford felt they were very unfortunate to not get some decisions given their way throughout the game but this did not stop the ladies from carrying on and fighting hard. In fact Brentford ladies worked really well tonight and should be very proud of themselves.

Lady of the Game (=MoM award) was Sophie Lee who worked very hard to get the ball forward as the right back and defended well in the her tricky situations.

Brentford Ladies now look forward for their first social of the season this week and thier FA Cup tie with Woodley United which is Away on Sunday.