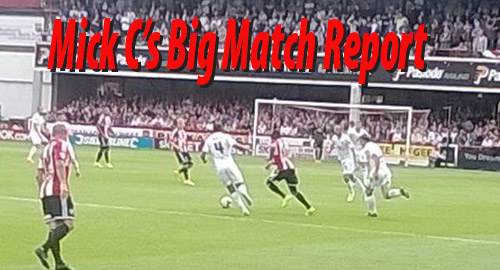 Brentford started a new season and new beginning for Marinus Dijkhuisen’s reign by snatching a last gasp 2-2 draw against Mick McCarthy’s Ipswich in the 95th minute.

There was a hint of new boy at school on the first day of term as Marinus strode out looking sheepishly up at New Road and breaking into a smile as he was welcomed warmly by three sides of Griffin Park.

Three debuts for the Bees as Kerschbaumer, Gogia and Hoffman all started, whilst the whispers gathered pace on the terrace as Andre Gray started on the bench with rumours abounding Andre’s head was turned by a Steve Brucie Bonus being waved at him by Hull City.

We started pleasingly, pinged passes and Hoffman finding red and white with aplomb. Gogia twirled and twisted like a little jack in the box, quick of feet and thought. Kerschbaumer on the move, left to right and up and down. A lovely move from Tarkowski, 60 yards into Judge’s stride a quick cross into Jota, our Spaniard with his head band rushed to meet the ball like it was a mirror and headed it towards Bialkowski who reacted with a smart save.

Judge fizzed one just wide from a 25 yard set piece and Jota cut in and shot a low daisy cutter wide but it was far from one way traffic as Freddie Sears created problems in our back line as a cut in from the right forced a fine low down save from Button and then an artful dodger poach stabbed one at Button from six yards but our keeper all in yellow was reminiscent of an AA patrolman as he performed an emergency assistance service for Marinus and us.

But a minute before the break, Fraser cut in and let fly from 25, ping off Buttons right post and away, we all exhaled, but Emmanuel chipped it back in and Kevin Bru scissor kicked the cross into the ground and up into Button’s right hand side of the net. Nil 1 and the worst time to concede!

Whatever was said at halftime was lost in translation as the Bees were slovenly from the restart, straight from our corner, Bialkowski collected the ball, ran to the edge of his area and underarmed the ball to the right winger, a chip down the right and Sears was away, Alan Mac raised an arm and chased across like a dog chasing the postman, but this race was run, Sears rolled it across as Button narrowed and Bru buried it into an empty net. 0-2 and Dijkhuisen’s dream day was having a nasty dose of reality sprinkled on it.

For the next twenty minutes it was distinctly average, the pitch resembled the aftermath of the Horse of the Year Show and the sandy turf mirrored our play, patchy, ugly and giving way at vital times. Our defence lost their bearings and Toumani and Judge were overrun. Marinus threw Gray on for Kerschbaumer as our favoured 4-3-3 became 4-4-2 and then Alan Mac was sacrificed for Vibe with 15 to go.

Andre created a chance for Judge to sky over and Jota missed a headed cross from six yards as the Bees went a knocking. As the clock ticked on, Jonathan Douglas trotted on, but McCarthys cherry on the cake substitution melted into a mess. A healthy chip and divot from Tarky upfield and Andre was in front of his man, up to the area and he cooly slotted home 1-2 and their was life in the Brentford pulse.

Hoffman turned and shot, Douglas blocked, corner, Marinus urged Button up to join the attack and bring the kitchen sink with him as the Bees went all in, Judge rattled it in, everyone missed it on the first rush, the ball bounced and in the melee off the bar in pinball penalty area alley, Tarky charged through like a shopper in the boxing Day sales and bundled it in. 2-2 and the crowd roared with relief.

Whistle blown immediately and Marinus has a point where none looked likely. The stats will flood into his office for first thing Monday morning, but the old saying its not how you start its how you finish will be the most telling statistic from todays game.