Following a disappointing performance against Birmingham at the weekend, Brentford looked to redeem themselves against mid-table Huddersfield, who beat the Bees 2-1 back in December. But with high hopes on another freezing cold Tuesday night – there was a sense of positivity in the air. Positivity is not often a word associated with Brentford. Last minute nail biters, heart-breaking finales and unlucky results are things we associate with Brentford.

It seems as though the storm has calmed, in our minds we hope, and we can get on with the rest of the season and hope to finish as high up the table as we can. Slightly greedy. Majorly possible.

With the team line-up revealed pre-match, we saw Warburton replace striker Andre Gray with on-loan Everton youngster Chris Long – the question was: could he score us some goals? Last week, we saw genius Jon Toral nail a hatrick against Blackpool, giving us the three well-deserved points. This week, he had been dropped to the subs bench. Oh what a difference a week makes.

4 minutes in and Long proved to us that he was rightfully picked to start the match; galloping through the Town defence before shooting past goalkeeper Alex Smithies, who had no chance of stopping it. The first 20 minutes saw Brentford dangerously test the Terriers defence, with the northern men becoming increasingly frustrated. On 22 minutes, the Bees allowed Harry Bunn to take a shot from the edge of the box which flew past David Button and our defence. The already showing-himself-to–be-a-stupid-ass Bunn then decided it would be clever to celebrate in front of the home fans. I think Mr Ice bun will be regretting this at fulltime, the moron. Lucky for him he was only given a warning, although the referee continued to be lenient to the dirty Huddersfield side further into the second half.

The second half was the sort of response you love from your team. No settling for a point or becoming miserable and losing control of the game. We took control. Huddersfield could not cope with the pressure of our midfield and it seemed their tactics of getting behind the ball and hoofing it constantly did little for them. 5 minutes into the second half saw three Huddersfield defenders fail to prevent Spanish star Jota moving freely into the box, casually passing to Long who slotted home his second of the match. Taking back the lead gave us the confidence we needed and we then began to embarrass Huddersfield all over the pitch. 70 minutes in and on-loan Spurs midfielder Alex Pritchard made it 3-1 with a fantastic effort that was deflected past Smithies. Many chances followed for Pritchard, whose superb free kick was saved by the visitor’s keeper, whilst Jota and substitutes Gray and Tommy Smith also made the Huddersfield keepers evening hell. David Button sat back and relaxed during the second half, with the only potential threat coming from James Vaughan’s long-distance shot, which was easily saved by our keeper.

Vaughan was just another example of the ref’s lenience as he was warned at least twice for pushing and shoving our players intentionally – without a single card being given. It was clear to see the Terriers were terrible – and they became aware of this; responding through violence and taking their frustration out on us. It was really disappointing.

To sting them even more, the Bees domination did not stop and the opponents defence fell to pot – with a last minute chance falling invitingly to sub Toral, who drilled home the three points with a 4th goal in the game. It wasn’t quite 42 shots but it was near enough. 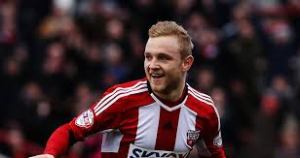 Again, another performance which makes us question why we perform like we do at places like Birmingham, Charlton, etc. We run all over these teams, and make a mockery of them, I just hope we don’t show ourselves up against Ipswich, because they are a team who want to be at the top and will take advantage of any mistakes we make.

Oh Brentford, what do you do to me. You drive me insane, make me feel the worst pain – that wasn’t intended to rhyme, I promise… but you get the point. What makes Brentford so special is the atmosphere around us, even on a Tuesday night it was electric. What makes it even more special for me is that there is one person in particular who loves Brentford and has shared their ups and downs much longer than me – my mum. That mad woman who introduced me to this developing team, this woman who through 40 plus years of being a fan never gave up on them, and a woman who to this day will always have a smile brought to her face by Brentford FC.

Brentford are a massive part of my life and that is all thanks to my incredible mum. Even that first Brentford match you forced me to go to, dressed in the most horrendous pink Brentford beanie and a far too tight BFC shirt – I am so glad she did. Not the beanie though, I’m not glad she took pictures of me in that.

Turning round even on the most cold Tuesday night game, seeing my mum smiling and cheering – that’s when I know things are going to be alright, and that although Griffin Park is a place that can break or make, it is a pretty wonderful place to be.