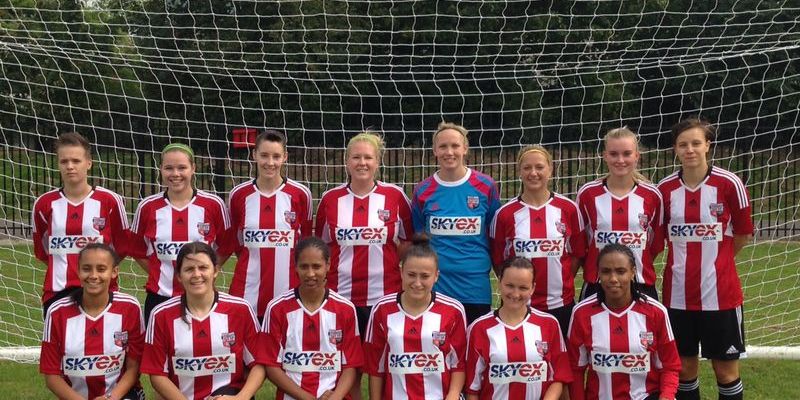 Charlotte Tanner reflects on FA cup disappointment, the defence of the Capital Women’s Intermediate and three tough away games in a row: QPR, Watford and Crystal Palace as they strive for the league title.

The weather has turned guys, all it seems to have done this week is rain!

Thursday at training some of us braved the weather to train. We started off with a possession circle game as always then went into a drill where we had to create space, timing runs to pass the ball in the correct areas to our team mates. Knowing when to go for a short pass and turn out or to hit the space for someone to run onto.

We also looked at playing out from the back and trying to keep the ball as much as possible. Keeping possession of the ball is key to win games successfully.

Sunday’s game saw us play Long Lane in the FA Cup, with a lovely trip around the M25 to East London!

For a small club they have great facilities, 3G pitches, changing rooms and even a little club house.

We went into the game with only 11 players and those were; Caroline Brooks (keeper), Sophie Lee, Manuela, Me (Charlotte Tanner), Amber L, Vicky James (skipper), Goody, Sophie T, Lisa Grant, Lucy Gibson and Dana Johnson.
The game started well, we were passing the ball around and playing out from the back confidently. This saw Dana Johnson get through on goal twice putting us in the Lead 2-0.

Unfortunately we couldn’t clear the ball and their striker slipping through the back four Long Lane quickly equalised making it 2-2.

Little Lisa got taken down inside the box and we received a penalty out of it, in which Vicky James sent the ball flying to the back of the net. We we’re back in it 3-2!
Until a cross whipped in from the winger found the head of their centre midfielder making it 3-3, but not for long. Lucy Gibson was fouled off the ball leading us to a free kick on the side line not far into their half. Vicky James sent the ball curling into the box finding an open Goody near the back post to header it in.

We still had our chances when Vicky James had a shot from 30 yards out and their keeper just tipped it over the net.

That was the first half of an jam packed half, 4-3 to us.

We found ourselves defending for most of the second half trying to get it up top for someone to get on the end of it instead of passing it around like we did in the first half.

There was a bit of a scrap to get the ball away from the box and Lone Lane’s striker fell to the floor.
The ref awarded a harsh penalty, making it 4-4. Not long after, their winger got hold of the ball heading for the box. Our keeper came running out but unfortunately the winger kicked the ball over the keepers head hitting the back of the net. 5-4 down.

We got a few corners and a free kick. Goody stepped up to take it and it looked the one, but it narrowly went wide of the post. Final score 5-4 to Long Lane

It was unfortunate that we did not nip another goal but it wasn’t meant to be, we are still in 2 more cups and we have the league to focus on as well. Onwards and upwards, what is done is done.

A little message from the Manager;
“I would like to praise the girls for their hard work in the game having limited team with no subs to be able to use this was hard work from the start and in the first half played some really good football.” (Dan Saunders)

We now have four really big games ahead with Enfield town at home in the Women’s Capital Cup which we won last year, at Lampton school, 1 o’clock kick off. Please come and show your support for us ladies. Then we have three away games in a row to QPR, Watford and Crystal Palace, to keep the title hopes going we need all three points in all three games.