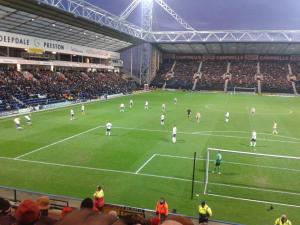 On paper a trip to take on a side unbeaten in 11 and welcoming back their talismanic striker was going to be tough.

On the pitch it seemed nothing of the sort for a Bees team brimming with confidence and self-belief as North End were brushed aside by a score line which could have been even more emphatic.

Mark Warburton, in his first away league match as manager, stuck with the same side that had been on a roll in recent weeks, but hey ‘if it aint broke, don’t fix it’ as the old adage goes.

The opening to the game of the day in League One was a cagey affair, if anything Preston had the better of it without really creating much in the way of clear cut opportunities. This would change however when George Saville’s through ball found Clayton who somehow got to a ball he didn’t look like having a chance of reaching, only to be felled by the home keeper. No hesitation from the referee who pointed straight to the spot. Up stepped Adam Forshaw to calmly send the home custodian the wrong way with a low hard penalty.

Just as the travelling Bees fans had sat back down having erupted in jubilation at the all-important opening goal, four minutes later they were on their feet again when Forshaw turned provider, his initial shot was only blocked but with the characteristic tenacity and determination he regained control and slid a pin point pass to Marcello Trotta who calmly slotted in a 2nd for the divisions form team.

Even the most ardent of Bees fans couldn’t have expected to be chanting ‘Easy, Easy, Easy’ at this stage of proceedings.

To give the home side credit they did attempt to get back into the game and forced free kicks in worrying areas but on numerous occasions they had their shots blocked by the wall and the danger was averted. Indeed the closest the hosts came to a goal in the first half was a miss hit corner that David Button gathered just under the bar.
Worryingly for the Bees a mazy run from Kadeem Harris lead to the Cardiff loanee being challenged in such a manner that a stretcher was required and the whiz kids afternoon was over, ably replaced by Sammy Saunders.

Half time arrived and the scored remained 2-0, a very strong position for a visiting side at Deepdale and one that had the home fans and team shell shocked.

After the interval Preston gave as good as they got asking questions of the Bees back line. Indeed a deep cross brought about an incident in which Jake Bidwell was adjudged to have fouled, a little harsh but fair in all honesty. A second penalty of the game was awarded, up stepped North End striker Joe Garner, looking to add to his tally on his return from suspension, however David Button had other ideas, getting down well to keep out the spot kick, albeit probably not the sweetest hit penalty of Garners career and the sheet remained clean.

Buttons save seemed to deflate the home team still further and with 15 minutes remaining Saville ran at a floundering defender and sent in a cross that Saunders ‘The League 1 Beckham’ would have been proud of himself, however Sam for a change was on the end of a cross and following some unbelievable chest control blasted a volley into the net from a seemingly impossible position under pressure from both keeper and defence, and the celebration that followed showed that the winger enjoyed the strike.

Further chances fell to substitute Will Grigg and Forshaw with a long range effort but the game reached its conclusion with the score a resounding 3-0 score line to move The Bees to within a point of top spot.

The Christmas period is always a testing time with games coming thick and fast, however the squad is strong enough in each area to cope with any injuries, suspensions of fatigue that may occur. Its only half way but its looking far better than a few short weeks ago. #beelieve