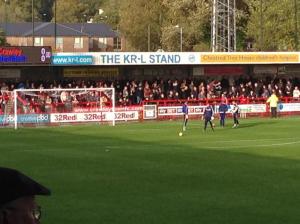 A 5th minute Adam Forshaw penalty was enough to give Brentford all three points and extend the winning run to four games.

The penalty was won by Kadeem Harris after he went on a mazy run past a few defenders and went down after a clumsy challenge by Kyle McFadzean and Forshaw made no mistake from the spot, sending Paul jones the wrong way to equal his goal scoring tally from last season of 3.

Crawley tried to get back into the game with the on-loan Kyle Bennett when his swerving shot was comfortably held by David Button.

Forshaw had a good chance to double his tally but after good work down the right by Donaldson and McCormack found Forshaw in the box but he blazed over when he should of found Harris.

Both teams found chances hard to come by with both defences on top form despite nice midfield play with Forshaw and Saville controlling the midfield and passing with flair and range.

Adam Drury had Crawley’s best chance in the first half to equalise after Crawley crossed into the box and the ball was headed out to Drury but his shot was not cleanly struck and was straight at Button.

Toumani Diagouraga came on for George Saville who went off feeling unwell.

Brentford started the second half in typical slow fashion and almost payed the price when Mike Jones broke free on the right and fired in a low cross but luckily Drury’s low header went the wrong side of the post.

Crawley had another chance when Mike Jones long range shot flew over the bar. It was tough going in the second half with both keepers not having to pull off any real saves.

Brentford should of doubled their lead when Forshaw gained possession in midfield and he set Donaldson free but he couldn’t shake off the defender and his shot was blocked for a corner.

McCormack was finding space on the right hand side and he had time to cross the ball which found Harris far left of the box but his volley was miscued and was well over. Forshaw also had a volley go well over after another cross by McCormack.

Forshaw worked Paul Jones when his shot from the edge of the box but he pulled off a fine save. As the match was coming to the end with Crawley on the attack, Dean and Craig picked up yellows for rough challenges, with Craig maybe lucky to get away with the yellow after he pulled down Nicky Adams when he was clear.

When Crawley brought on ex-Brentford villain Gary Alexander the game was won for Brentford. His cameo included an air kick, a quick free kick going straight out of play and a dive in the box. With 1214 away fans giving Alexander abuse it was good to see for the fans after the player left Brentford in less than pleasant terms.

Brentford saw out the 5 minutes of added time well, not allowing Crawley to get in any attacks. The ref blew for full time and Brentford recorded their 4th straight win and are now comfortably in the playoffs and are catching the teams above them.

It is no coincidence that Brentford have got 4 straight wins now that Rosler seems to have a settled team. The defence was excellent against Crawley, with McCormack a revelation at right back with Dean, Craig and Bidwell rock solid.